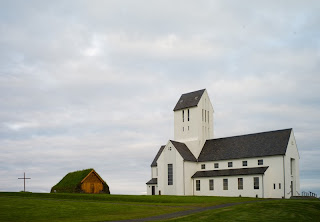 Skálholt is the centre for the Church of Iceland. The first church was probably rised here already in year 1000. One of the first churches is now reconstructed upon the rests of it. 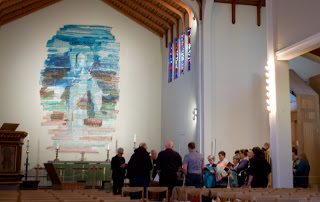 The present cathedral was finished in 1963, and when I was there, the choir had a rehearsal before the anniversary concert on the coming Sunday.

One of the tenors was the first to show up, and he answered "ég tala bara íslensku" when I started talking to him. That did not prevent him to explain that this was also his anniversary, he had been singing since the church was built. "Ég er gamall, sjötíu ára" he said when I looked confused - he did not look like a 70-year-old.

He also told me that his son lived in Norway and "hann hafa tvær dætur, ég er afi!"
He ensured himself that I understood what "afi" meant and repeated that his son had two daughters. "Farfar, bestefar" I replied. He repeated me and was happy.
The most important was now said, and he had to join the other members who now showed up one by one. 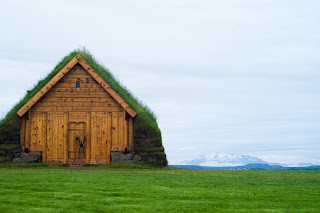 I wondered which mountain I saw behind the churches.
Hildur - one of the farmers in the area - gave me a self-ironic anxious look. "That is Hekla. It uses to have an eruption every 10 years, and now it is 12 years since last time." 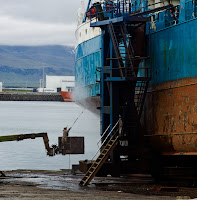 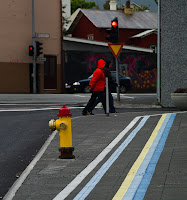 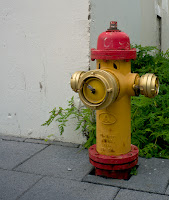 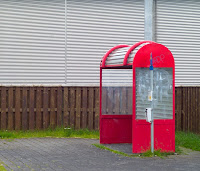 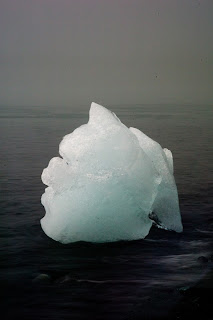 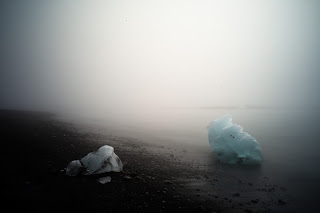 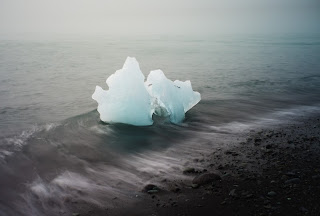 Sif - daughter and assistent of a ceramicist in Reykjavik - adviced me to go an see the Reynisdrangar.
She also warned me about the tides. The tidal range is high, the sand beach shallow, and tourists have been trapped in flood tide and found themselves on a sandbank far out in the sea and had to be rescued.
"Stupid tourists" I replied.
"But you are not stupid?" she asked.
"No." I said. 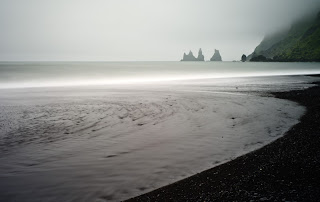 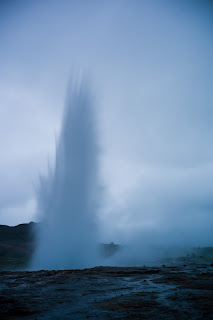 .. staying alone in the rain with these wonders after all the others have gone.
"Being human is more than being usefull" - is an old saying.
After all the other tourists were gone, only M. and I was left. She was a successfull engeneer who had used all her energy to build up a company.  Now the company was sold, and reorganised - and she quit. And she took a 4 week long holidays around Iceland alone on bicycle to think over lìfe.
And lying outdoor in a natural made hot pool, seeing a beautiful landscape constantly changed by inner and outer forces - fire and ice, and standing still some hours in the cold rain and warm steam from a regular - but all the time unpredictable - breathing hole in the earth, make her face a deeper part of herself.
"What is gold good for?" the children asked.
"You can hide it a place were nobody sees it." mr Happy answered.
(Andri Snær Magnusson) 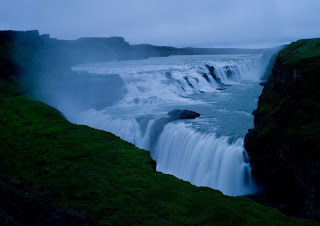 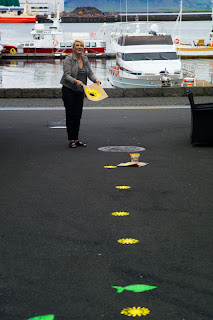 Sædís marks the path to her gallery - and to the fish resturant vis à vis.
Lagt inn av ajwk kl. 23:09 No comments: 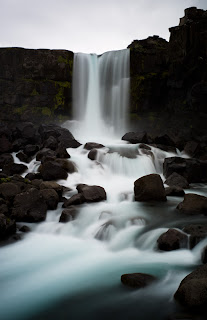 
(Explanation: 3 posters with text "vi pusser opp" nailed on a fence along the street) 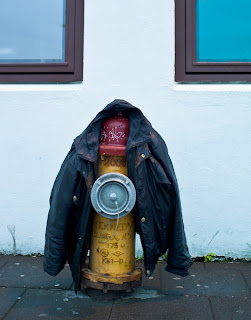 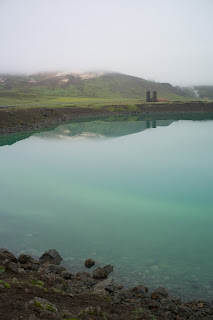 A little lake once made by a sub-terranean damp explosion.
Green from minerals and hot-water algæ.
Lagt inn av ajwk kl. 13:51 No comments: 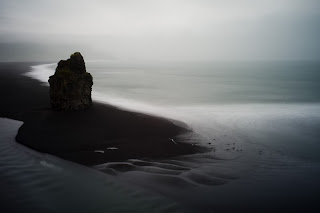 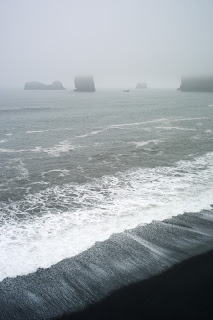 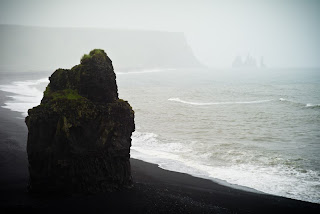 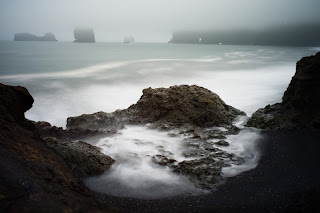 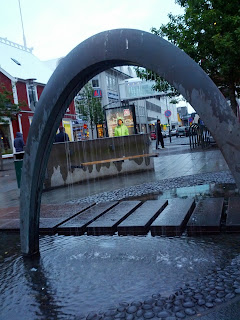 The weather is stable.
It is raining most of the time.

Commercial posters and a sculpture in the central part of the city emphasise the mood.

But my Icelandic host says that "bad weather" only is a state of the mind.

So I started the day in the icelandic way - a visit to the local bath.
Some laps in the 50 m pool, a couple rides in the water slide, and then a rest in heitir pottar - one warmer than the other. And everything outdoor in the chilly (ca 10ºC) weather - but warm water.
Most of the people there were retired - I was probably to late to see someone at my own age. And I think I was the only non-local. 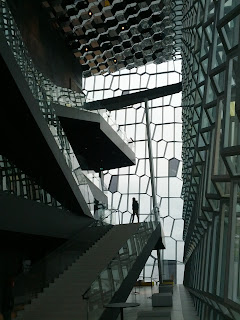 Inside Iceland's new spectacular piece of art at the shore in Reykavik - the concert hall Harpa.
The building of it was halted during the worst part of the financial crises, but with renewed optimism it is now completed and rises proudly as an exclamation mark behind the people's strength and surviving mentality.
Only the concert organ are not bought in yet so the place for that is empty - but ready. The city's grand concert organ is still the one in Hallgrímskirkja, and the recent cleaning the pipes of this costed several million Icelandic kroner.
But one day there will be raised money to an even finer organ in "the harp".
Lagt inn av ajwk kl. 00:58 No comments: 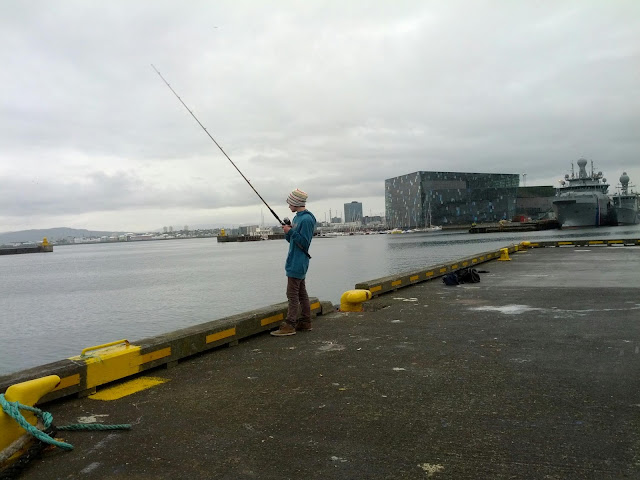 Andrew and his friend is fishing from the quay at the old fisher's harbour in Reyjavik.
The nation's new Concert Hall "Harpa" can be seen behind him.

He smiles and says "yes" when I ask if he get anything.

He is not quite sure what the fishes are called in English. But I ensured that they are probebly called the same in Norwegian. So with satisfaction he tells me that he get þorskur and bleikja.
We did not conclude what "bleikja" was called in another language - my attempts to describe the fishes I could think of, didn't lead to a clear understanding. But I promised that I should google it when I had an opportunity.

(Written at the cozy 1960'ish retro Stofan Cafe downtown Reykjavik. They made a good toast for me and an extraordinary tasty double espresso.
Enthusiastic discussions in a nordic language with a charming accent is summing from every corner.)
Lagt inn av ajwk kl. 00:11 No comments: 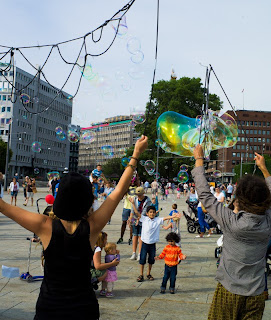 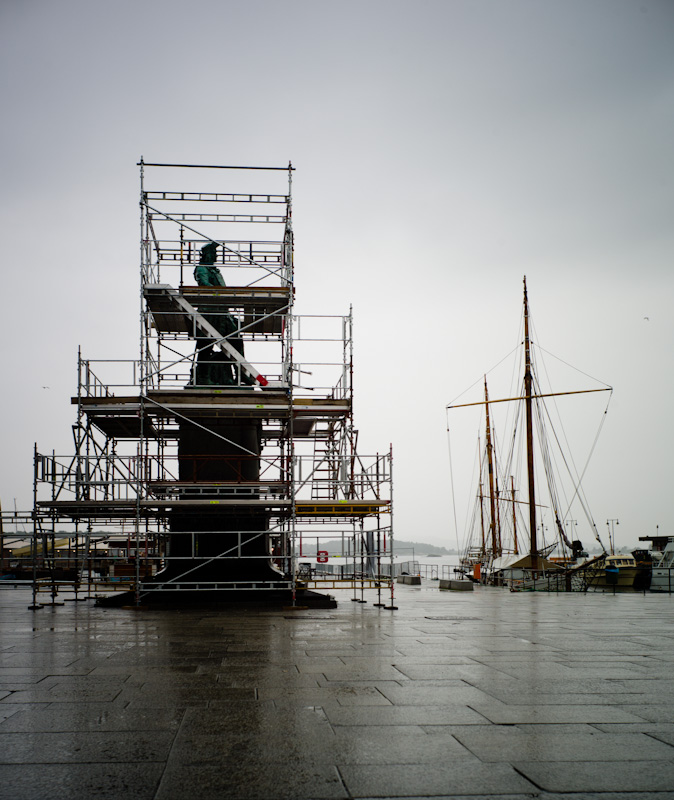 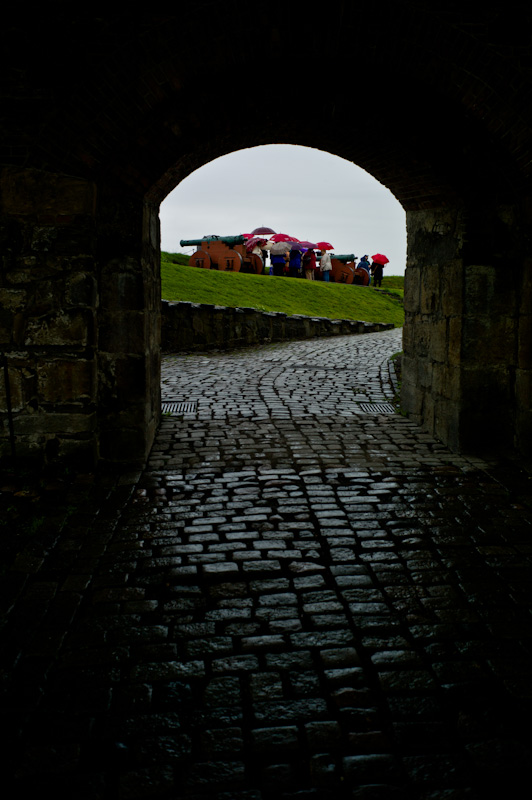